In my last blog I talked about my son Zack Collie graduating from High school and College after being paralyzed at the age of 15.

Five slow and steady years passed, and Zack’s college graduation day was coming up. A couple months prior it hit me just what an amazing accomplishment this really was. Zack was not a studious kid. Life before his injury he made B’s & C’s and didn’t much think about college. Since he was injured the end of his freshman year, it was still early to see what path he was going to take. Derailed and thrown into the paralyzed world we scrambled to find our new normal and going to college was the best sounding solution at that time to keep Zack focused on something positive. 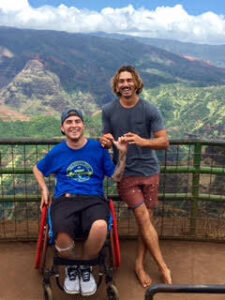 I wanted to get him a graduation gift, but what? I remembered taking him just a year after his injury to an adaptive ski school in Durango, Colorado. Zack used to snowboard. That Colorado experience taught us there is travel after paralysis. That is actually what that program is for. It was such a great learning experience. Look up Adaptive Sports Association (ASA) and if you are in Southern California there is a scholarship part called Torrey Pines Kiwanis Club in La Jolla California (Ross & Sue Ehrhardt ski scholarship). Since I had this travel experience, I thought why not take him somewhere! The only place I’d heard Zack sound interested in was Hawaii. The saying where there’s a will there’s a way rings true! My next thought: who do I know with a timeshare? A few calls later and I had a condo in Princeville, Kauai. Look up flights and booked tickets, check. Everything else will plan out later. I was so excited to present this gift.

Since I haven’t flown with Zack for years I was nervous at first but once we were at the airport, it was fine. Get there early because you board first as an individual using a wheelchair. They bring out an aisle chair the airline provides to get you to your seat. The flight attendants were very helpful. (Oh, big tip! Bring your wheelchair cushion on the plane! Since it was a 6-hour flight the wheelchair cushion was great, don’t forget it on the plane though.) Anyway, we arrived in Kauai, we had help exiting the plane as you’re the first to get on and last to get off. Once back in the wheelchair, over to baggage claim and met up with my other son, Zack’s brother, who island-hopped over from Oahu where he lives. I pre-booked a wheelchair van with a ramp and that was already parked with keys in the glove compartment. I think renting another type of vehicle could have worked as well, depending on the type of wheelchair you have. Our condo was up in the Northern part of the island. It was about a 45-minute drive, and we had that island breeze going that made it truly feel like Hawaii. The check in to the condo was easy and our place ended up right next to the pool, an amazing location for Zack. We toured the whole island, stopping at different locations, lookouts and tourist spots. We went to a Luau which is definitely something you can do in a wheelchair. I also booked a helicopter tour which Zack was able to be lifted into the seat and enjoy that experience. 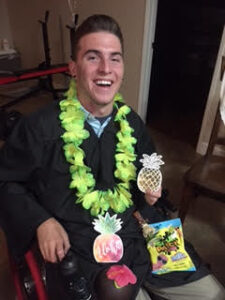 Not everything went perfect. Our van stalled a bunch of times, but we navigated through that.

Zack tried to skydive, He was literally the next one to go up and they landed the plane because of wind. He tried the next day and our van wouldn’t start, so we have to think that wasn’t meant to be on this trip.

Hawaii is a beautiful location. Each island is different. I thought that it would be much harder than it was to travel with a wheelchair, but it was a wonderful week. If you ever plan on going, make attentive plans but stay open and flexible. If something does go wrong, you figure it out then. Don’t think you can’t travel just because you’re in a wheelchair! There are many, many places to see! You can even look up best wheelchair friendly places. You will be surprised at the many locations!

My last few parting tips: get to the airport in plenty of time. We almost missed our flight home. Looking back wouldn’t have been all that bad, getting stuck in Hawaii for another night! If there are places you wish you could see. Go for it! I have a travel savings jar, and just by putting $5, $20, $50 in it adds up. There are many house rentals too that are wheelchair accessible. I like to look up stuff like weather conditions for that general month, things to do in that area. Don’t let your disability stop you from being adventurous.

There is a whole world out there! Aloha!

193 thoughts on “Traveling with a quadriplegic | Amber Collie”

ONE STEP AT A TIME BY BRIAN PEAHUFF

A Story of Overcoming Abuse, Disability and Racism