” I woke up to find tubes and needles tethered in me. I could vaguely make out the white walls around me, judging that I might be in a hospital. The effect of the tranquiliser had still not worn off when i did a reality check just see my left leg missing.” 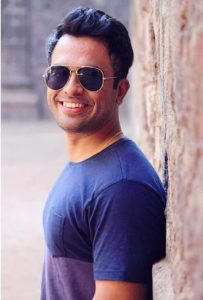 This stratement by Anuj Dalvi, a 23-year old engineer, came resoundingly hard on us. The impact of just the thought of lossing your leg was so strong, we cannot even comprehend the pain Anuj might have felt first hand. A sensitive soul and ever soft-spoken he recalled the curveball that fate had in store for him. On his way to surprise his grandmother on her birthday, he faced a road mishap and lost his left leg at the age of 19.

Growing up in a family wherein each member was in some way involved in the field of engineering. Anuj remembers drawing cars and bikes as a kid. He already seemed to have had decided upon engineering in mechanics as his profession. Little did he know that his choice of career would be unusually decisive for him and his future. As the exigent search for a prosthetic leg began, he made use of all his learnings to make sure that he chose a suitable one. ” I deamt of running, cycling, and driving a car. I had to choose the best prosthetic.” says Anuj.“

“ I had seen many examples where people had puit their studies after hitting a roadblock. I personally think that instead of quitting, one should complete his/her studies in whichever way possible because education is the only path for success and it will help you to compete with the world and stand out as an enabled person” , he shares. Exercising this belief and a life of normalcy he went on to complete his Bachelor’s degree from the University of Mumbai. But the frantic search for a sound solution kept him on awake, experimenting and exploring. He wanted to better understand, help, and connect with thousands like him who had lost a part of their body, their lives.

Anuj thus started working on his passion project and is close to designing a prosthetic leg himself. He attempted to make use of Kevlar fibre with a unique combination of high strength, hig modulus toughness, and thermal stability. Other manifestation of his imagination included lightweightedness of the product and its cost efficiency. To modul his idea into nothig short of perfection Anuj has made multiple models of his project and evaluated them under harsh stimulations to meet the needs of the service receiver. His models worked have been working with a high accuracy and the project got him nods and pats from his professors.

A learner for life, Anuj has paved his way for masters studies with the idea of his brainchild resonating with the choice of his subject areas: a study of elasticity and material knowledge. He plans of his studies abroad and hopes to come back best equipped to hone his skill set to a finer degree.

” Life is about balance. Since I have only one leg, I understand it better“, Anuj’s story is an epitome of such confidence, standing tall in the face of gruelling adversity. To recuperate from such a calamity redefines one’s lives, but aiding others to fight their calamites redefines many. An action that can indeed change lives for the better.

524 thoughts on “AFTER LOSING A LEG AT 19, ANUJ DALVI STOOD BACK TO DESIGN PROSTHETIC LEGS FOR OTHERS WITH A SIMILAR FATE”